"The first thing you notice about The Cat's Cradle is it's airy openness. Divided into two main rooms, the front room houses the office, greeting area, a play area and a few of the cats' quarters; the back room houses the majority of the cats' quarters and another play area. An abundance of screened windows lets fresh breezes blow through, and screened doors allow the cats and Kristen Westhoven, owner and operator of the facility, to keep track of what is going on between rooms. "The two-story inn contains 16 floor-to-ceiling cat rooms, most 3 feet wide by 7 1/2 to 9 feet tall. Rooms are fully washable and come equipped with a litter box and three shelves to which are attached soft velour pads with hook and loop tape. This gives the cats added pleasure and comfort, as well as something to knead with their claws. "A geriatric unit for older cats features shelves that are closer together. These shelves were created because older cats often have arthritic legs, which makes it difficult for them to climb. Also the eyesight of older cats may be bad making it difficult for them to judge distances. The unit is also suitable for very young kittens still practicing their jumping skills. "For a family of cats there is the penthouse, a room located in the loft on the second story. A large but cozy room with homey stenciling, it features screened windows that overlook nearby Pawtuckaway State Park as well as wicker cradles lined with feather pillows and cardboard lounges with lots of holes to peek through. "With its black-and-white diamond-patterned floor, ceiling fans, skylights and classic post-and-beam construction, The Cat's Cradle is indeed striking. A spiral staircase adorned with tempting hanging toys that connects the back room with the upstairs loft is an appealing place for cats to climb and play. Comfy futon couches and fern plants add a feeling of home. On chilly days, an antique iron stove warms the back room and provides a cozy area for the cats to curl up for a nap. In the winter, wicker cradles are placed in front of the stove for the cats to nap and cuddle in." For further information see "Cradle of Love" by Tiffany Lewis in Cats, June 1995.

The Cat's Meow
"Featherbed Inn" caters to guests of the feline persuasion
Sunday, May 4, 2003 | By SYDNEY B. LEAVENS ( Monitor staff ) 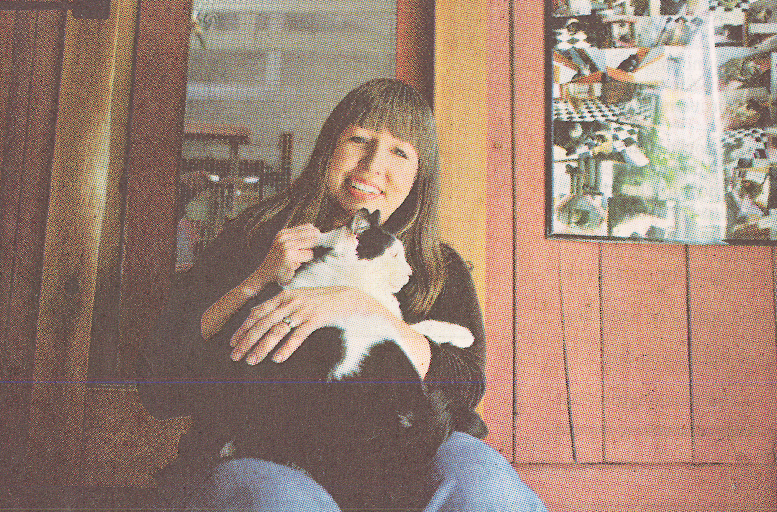 Like the owner of any luxury hotel, Kristen Westhoven indulges her guests. She provides exercise equipment, massages and window-side views of the rural countryside. She delivers mail room to room. She knows which guests take ice in their water and which like the occasional spoonful of tuna fish or corn on the cob. And she never charges extra when a visitor climbs up on the counter or scratches the walls. She invites it.

At The Cat's Cradle, a "featherbed inn," the guests are cats, entrusted in Westhoven's care by vacationing owners who want them to receive specialized attention, more than what a teenage neighbor with a house key can provide. Hundreds of cat owners - 250 last year - bring their pets to the inn, shelling out $14 per day for one-cat suites or $37 for four cats to share the slanted attic "penthouse." Some bring special food for Westhoven to feed or certain regimens for her to follow regarding their pets' care.

Westhoven does her best to oblige.

"(The cats) are part of the family. People dote on them like children," she said. "The owners who pamper their cats more often appreciate more what I'm doing."

Westhoven speaks as one who was once a customer. She came to own the inn in 1999 by ironic circumstance, when the cat lover who started the inn in the early 1990s discovered her husband was allergic to cats. The woman, Judy Clark, asked Westhoven and her husband, Andy, to take over. The couple quickly sold their home in Mont Vernon and moved in.

The airy inn was designed for cats. Ledges line the walls, so the animals can leap around the entire parameter and ring a bell that hangs just below the ceiling. The windows are strung with birdfeeders, so cats can perch on the windowsills and watch sparrows. Large toys, from a multi-level carpeted "condominium" to a seven-foot carpeted fake tree, provide exercise. The inn's wooden supports are lined with sisal rope for the cats to scratch. (Though many choose to scratch the cabinets and walls instead.)

Westhoven plays soft music for the cats as she scoops kitty litter and washes bedding. She lets them out into the enclosed play area in shifts. When she lets out more than one, she supervises play - even in the luxurious setting, an 18-cat social could quickly degenerate into a snarling fight.

At night, she listens for distressed meows over a baby monitor that links the carriage house to her home next door, connected by a breezeway.

"If I'm gone too long, they'll let me know," she said, laughing.

Some owners bring their cats to Westhoven because they require special diets or medication. One frequent guest, for example, is allergic to cat food and eats a diet of rabbit and venison. An elderly cat eats only roast chicken and cream. (The owner brings it to Westhoven, who keeps it in her freezer.)

Other owners, however, just want their furry family members to receive certain pampering. Last week, Westhoven gave daily massages to Prince Charming, a flame-point Himalayan shaved by his owners to look like a lion. She fed ice water to a domestic short-hair named Moo. She read to Daffy, a domestic long-hair cat, from a Florida post card.

On Tuesday morning, Daffy crouched on her darkened shelf. The post card, a tropical beach scene, lay outside the door.

"Daffy doesn't like other kitties," Westhoven said in the rounded high pitched coo she reserves for speaking to the cats as she opened the suite to pet Daffy's head.

One family had Westhoven deliver its cat to a private jet, to be swept off to a vacation spot. Another owner insisted on renting the penthouse suite for her two cats because it had its own window. (Westhoven usually likes to reserve the attic room for groups of three or more). When the woman arrived with her two darlings, she promptly sat in the attic's rocking chair with the cats.

Her husband lugged two oriental rugs up the narrow spiral staircase. The couple left the cats with their own scratching pads, toys and water glasses. Bowls, the woman explained to Westhoven, were not acceptable.

Westhoven tries to give each cat the comforts to which it is accustomed. But cats do not always want to behave as they do at home. Sometimes, a cat won't eat the snacks its owner insisted it had to have. Westhoven has seen cats reject the neatly folded familiar cat beds left lovingly in their suites.

"The cats go into resort mode," she said. "They want to try new things. They don't want everything to be the same as it is at home." 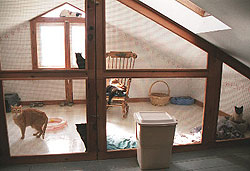 Whether you consider yourself your cat's parent, guardian or owner, chances are some serious pampering occurs in your household. Noting your dedication, many merchants now offer human-like, high-end services for cats. To get you started on some fun feline pampering, we've rounded up a list of 40 businesses that cater to your cat.

AWAY WE GO
45 Cat-Friendly Destinations
By Stacy Mantle

No matter if you choose to travel with your favorite feline, board your pet in luxury or just need a cat companion available to visit while traveling, we've got a destination for you. Each of these 45 locations offers first-class service for both you and your furry family members or have one or more "staff cats" to ward off the traveling blues. Whichever choice you make, these destinations are among the elite few that truly understand the concept of "cat-friendly".

14. The Cat's Cradle, Deerfield, NH This cozy New England inn offers cats all the comforts of home, including a feather bed and the sweet smell of wildflowers from nearby Pawtuckaway State Park. (sic) 603-463-7698